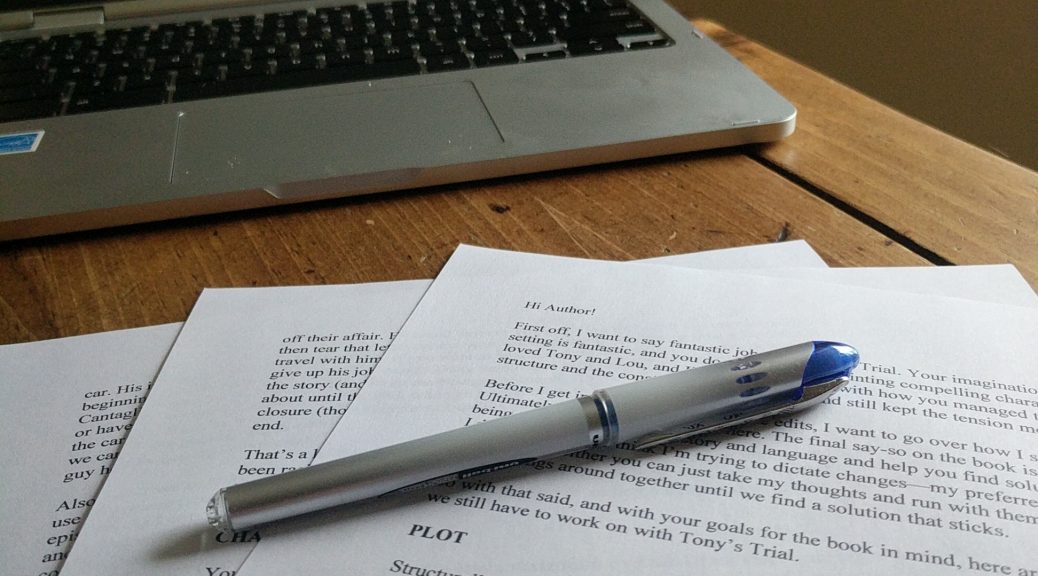 Most great developmental editing relationships begin with a sample read. This stage of building the author/editor relationship helps both parties understand how the other works, how they communicate, and what they do. No amount of reading about developmental editing can replace the experience of actually seeing a piece of your manuscript edited by the editor you’re considering working with. Here we’ll discuss what a sample read looks like, and ways you can use yours to maximum effect.

A Sample Read is Short

Most sample reads for developmental editing are short. Editors vary in their preferences, but five to fifteen pages double-spaced, size 12 font, is pretty normal. The editor needs enough space to get a sense of how your story begins, and to see genre, character, setting, voice, and pacing on the page. But they don’t need thousands of words, and they only have a limited amount of time for each sample. Your sample may cut off partway through a chapter, but that’s okay. It’s only a sample.

Most writers intuit that their opening provides the best opportunity for an editor to evaluate their novel. If you’re wondering whether your instincts are correct on that, let me assure you they are. Because the opening is such an essential and difficult part of a book, seeing it helps your editor get a sense of the level of your craft and whether they’re going to be able to help you. For the same reason, using your opening for your developmental editing sample means you’re likely to get a good sense of the editor’s working style. They should have ample opportunity to evaluate your writing in those first few pages. You’ll be developing a character and a setting, establishing voice, creating a mystery, hooking the reader into the plot, and more. Even if you’re doing that flawlessly, your editor should be able to write back and tell you what’s working and why.

One sample read will help you pick an editor. Three will help you pick the right editor. It can be difficult to gauge how good an editor is if you don’t have anyone else to compare them to. But once you have two or three samples sitting next to each other, you should be able to figure out which is the best fit for you. Trust your gut, and don’t be afraid to ask follow-up questions about an editor’s vision for the book and their scope of work before you make your choice. I recommend ranking your editors by preference before considering price. You may find out later that you can’t afford your first-choice editor, but knowing the difference between first and second choice may help you decide whether to adjust your budget to get what you really want.

Next we’ll talk about evaluating genre. You can also go back to our developmental editing resources.

Not all editors follow the same template when performing developmental editing, but most of them have a process. Generally it involves several steps, and we’ll dig into some of the most common here. Your editor may or may not follow this format for your developmental editing, but at the very least it should help you understand some industry terms and jargon and make it a little easier to talk with them about what they’re doing.

Most developmental editing happens the first time an editor reads through a manuscript, on what we call the “first pass.” Editors train themselves to bring fresh eyes to a manuscript each time they read it, and to read it as different members of its audience would (through what we often call “lenses”). But there’s no replacing that first encounter with a manuscript. It’s when the editor’s experience is closest to the reader’s. As editors read, they take notes on the manuscript, in a separate document, or both. They get to know the characters, the setting, the plot, the voice. They jot down questions, potential problems, plot holes and pacing issues. They form a general opinion of what the best revision plan for the book will be. By the time they finish the manuscript, they usually have a good sense of what it needs—often the ending helps them understand what’s missing from the beginning and the middle.

Once an editor finishes their first developmental editing pass, they’ll get started on their letter to the author. They’ll group notes by theme or content area (the protagonist, for instance, or the setting). They’ll discuss their thoughts at length, explaining narrative theory to help the author understand why a problem might throw a reader off. Their goal will be to communicate clearly, constructively, and efficiently. Occasionally they’ll make a few suggestions, but they’ll usually leave the fixes to the author. Even if they have some ideas, they’ll often just drop a note along those lines. That way the author will know they’re there, but won’t feel constrained by them.

You may, from time to time, hear editors talk about “spot editing.” This refers to going back over troublesome areas of the manuscript. Maybe the midpoint complication fell flat, and the editor needs to make a second (or third, or fourth) pass over it in order to understand what to do with it. Maybe the introduction didn’t do a good job of establishing character and conflict. Maybe the climax didn’t feel satisfying, and the editor needs to review previous sections of the book to figure out what was set up that didn’t pay off. Spot editing adds time to the developmental editing process, but it also means you’re getting solid, deep work done on the novel.

Occasionally, the editor wants you to make revisions and return the manuscript to them so they can do the whole developmental editing process again. We call this a second pass. It’s most common with second books, which are often written under heavy pressure from deadlines and promotional responsibilities. But it can happen anytime during an author’s career. If your editor wants to make a second pass, don’t panic! The book will be much better by the time that second pass begins, and you’ll probably have a much smaller set of changes to make when it’s over.